Statistics Minute: How Do I Determine If Pay Differences Are Significant or Not?

How do I determine if pay differences are significant or not? 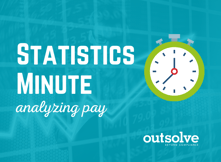 No matter how hard a company tries, there are almost certainly going to be measurable pay differences between employees within the same EEO Category, Job Group, and even Job Title, but how are you supposed to know if the gap in pay between gender or race groups is large enough to warrant further investigation? Eyeballing the percent difference between employees can only get you so far and does not answer the question of significance, so instead, we utilize what’s called a statistical t-test to help us out with measuring exactly how notable the differences are between employee groups.

Why use a t-test?

A t-test is a simple analysis that looks at the averages from two sets of data and tells us the probability of those two averages happening by chance. If the likelihood of the two averages showing up at random is less than 5% we can safely say that there is something significant happening between the two sets of data. Fun fact, the t-test was created out of necessity by a chemist employed by Guinness Brewing Company who needed a simple and effective method of measuring the quality of the beer.

As a standard practice, we use t-tests as a valuable tool when comparing salaries of two groups of employees such as male vs female. For example, if we calculate the average salary for both genders in a particular job title and find that males on average make $1000 more a year than their female counterparts, we would use a t-test to analyze if that $1000 difference in pay is statistically significant or not. If the t-test determines the difference is insignificant, we can reasonably assume no further investigation is necessary; however, if the t-test shows us the difference is statistically significant, then we would look at other variables that typically factor in the way employees are paid such as time in job or performance ratings to see if they explain the pay gap.

Nick Jones recently joined OutSolve’s compensation team as an analyst specializing in pay equity and market pay analyses. Nick also supports federal contractors with pay data analytics for OFCCP compliance reviews and state pay reporting. Experienced in interpreting big data, he provides companies with the vital information needed to ensure equity, efficiency, and competitiveness in their compensation. Nick graduated from Tulane University and is currently working on his master’s degree in Data Analytics at the University of New Orleans.

The Supply and Services list includes Corporate Management Reviews, Establishment, and Functional re...